Hop Along
with Tenci

www.hopalongtheband.com
Frances Quinlan has been meditating a lot on power. “When I was younger, I kept thinking that one day I would have a partner and that person would give me power,” she says. “That never came to be.” Instead, what Quinlan, the songwriter, lead vocalist, and rhythm guitarist of Hop Along, has found is that “power has an inherent awfulness to it and people who have it tend to be disappointing in how they wield it.” In this particular moment in history, this thought begs a greater question: what do we do with power and the men who so freely brandish it? “I’m angry that I believed in this false idea for so long, that a man would come along and show me what I was worth.”

This theme propels the Philadelphia-based band’s third studio record, Bark Your Head Off, Dog. Written over the course of 2016 and 2017 and recorded in the summer of the latter year by Quinlan, Tyler Long (bass), Joe Reinhart (guitar), and Mark Quinlan (drums), the album imagines what it’s like to cast off longheld perceptions, often without being certain about the new ones that will replace them. Much like on Hop Along’s first and second records, Get Disowned and Painted Shut, Quinlan seeks in real time to work through these emotions. On Bark Your Head Off, Dog, she also grasps at something more complicated. “Growing up I was constantly in my head and not a part of the world,” she says. “Now I’m trying to force myself into the world.”

Throughout Bark Your Head Off, Dog, one gets the sense that Quinlan is wandering in the thicket of a forest-a state of being that will feel familiar to longtime listeners-and on this outing, she hasn’t left a trail of breadcrumbs behind her. The album’s artwork, which Quinlan painted herself, invites the listener into that forest, as well. “There is a terror in getting lost,” she says, “the woods are at the same time beautiful and horrifying.” This curious wandering gives the album, both lyrically and musically, a heightened dimensionality. On “Somewhere a Judge,” Hop Along explores a dancier side to their sound, while “What the Writer Meant” showcases a string section and enormous, full harmonies. “One That Suits Me” welcomes and embraces the sound of a Rhodes and tambourine, but with a syncopated vocal rhythm on top, almost building to a call-and-response. Throughout, the music is full of gratifying, new deviations.

With the help of Spencer Radcliffe and Tina Scarpello it quickly became something more fully-formed. By spring of 2019 they’d recorded their debut My Heart Is An Open Field.

They recorded the album in Radcliffe’s home in just a couple months. Having played in the band, he understood the tenderness it needed to maintain. Half of the songs were written the week before. The album retains that spontaneity and rawness.

Shoman says “It was such a fun way to record without second guessing myself and to let things be.” 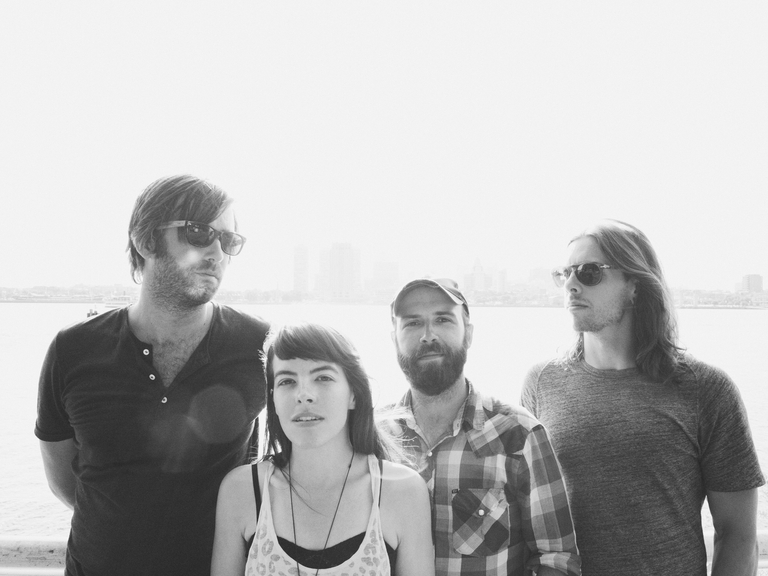 Hop Along has had multiple lives.  First conceptualized as a freak-folk solo act by Frances Quinlan, it progressed towards a fuller sound with the addition of Mark Quinlan on drums, Tyler Long on bass and Joe Reinhart (Algernon Cadwallader, Dogs on Acid) on guitar.  Emerging as one of music’s most unique songwriters, the captivating vignettes Frances has weaved tell vivid stories of desperation and weary awakening.  Her powerful voice is a spellbinding entity all it’s own, celebratory and raw, and one that can’t be shaken away.Their new album, Painted Shut, (out on May 5, 2015 via Saddle Creek) is their 2nd full-length (preceded by Get Disowned in 2012).  However, this release marks their first time creating as a full-formed entity, arranging everything as a group.  It was co-produced, recorded and mixed by John Agnello (Kurt Vile, Dinosaur Jr., Sonic Youth, etc.) in the great cities of Philadelphia and Brooklyn, and incidentally finished in the shortest span of time the band has ever made anything. Like their debut, Painted Shut is a series of accounts, a procession of fleeting and repeating characters.  However, it diverges from its predecessor in its close-up, controlled approach (most of the album features the band recording live), and more focused portraiture.  Whereas Get Disowned calls forth a dreamy collage of protagonists in a tone that’s often anthemic and surreal, Painted Shut is a grounded, less merciful image of many struggling adults (and children) in a severe landscape. Often depicted in Painted Shut are the two lives of legendary (though generally unknown) musicians, Buddy Bolden and Jackson C. Frank, who were plagued with mental illness until their penniless deaths.  Included are accounts of more everyday poverty, abuse, greed; and banal, sub-par behavior.  Society is unveiled as a structure that, in reality, was most certainly not built with everyone in mind.  Clearly this is difficult subject matter.  Yet the songs themselves move unencumbered and easily, forming angular pop anti-anthems, at times jubilant as well as irreverent.  Somehow, they are not sad songs.  There is joy, in the abandon of Frances’ unforgettable voice, in the exulting choruses.   One wakes to a sky that is a bright, ageless blue.  It’s morning and so clear outside that multitudes of lives can be seen, in focus despite the distance.  All of this is viewed through a window sealed with cracked paint that cannot be opened on either side.  That is how we must often view the lives of others, especially when it comes to people who have lived and gone from this world.  That’s another story.