“I think of this album like a bunch of abstract paintings,” says Ghost Light’s Tom Hamilton. “We present the songs as a series meant to be experienced in a certain order, but at the end of the day, whatever that series makes you feel is totally up to you.”

In that sense, Ghost Light’s brilliant debut album, ‘Best Kept Secrets,’ functions much like the band itself, drawing beauty and strength from both its complementary pairings and its unexpected juxtapositions. Formed in 2017, the group brings together five consummately talented artists from across the musical spectrum—guitarists/singers Tom Hamilton and Raina Mullen, pianist Holly Bowling, bassist Dan Africano, and drummer Scotty Zwang—and thrusts them into a wholly new context. The result is a record that transcends the sonic contributions and background of any single member, a collection that’s at once gritty and refined, sprawling and restrained, straightforward and psychedelic.

“When we started this band, all I wanted to do was make the most original sounding music we could possibly come up with,” says Mullen. “Everyone’s tastes and histories were so different from each other that I was really excited to see where the five of us could go as a group.”

Hamilton and Mullen began writing the core of the album in the spring of 2017, focusing solely on instrumental arrangements at first as they chased new sounds and experiences with a little bit of chemical assistance.

“We wanted to see what would happen if we opened up some new creative doors, so we got a whole bunch of LSD,” remembers Hamilton with a laugh. “Twice a week for a few months, Raina and I would eat acid and just work in the studio all night.”

The songs they wrote during those sessions were epic and immersive, influenced by a broad array of stimuli from the tense American political atmosphere to classic cinema. They drew on seemingly incongruous influences (“What would it sound like if Sufjan Stevens made a Soundgarden album?”) and composed with a filmmakers’ eye, scoring the dynamic scenes in their heads with vivid detail and deep emotion. While many of the tracks would ultimately end up being fleshed out with lyrics, several tunes remained fixed as instrumentals even on the finished album. 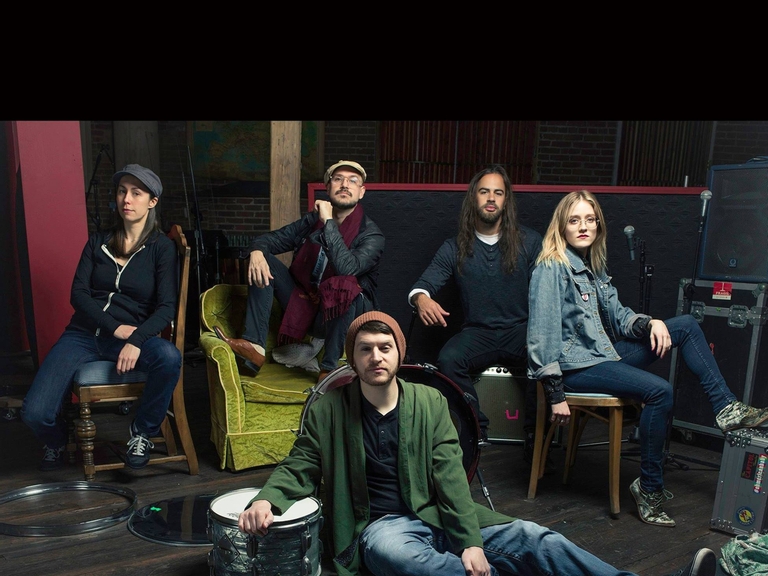 Ghost Light is a true musical collaboration; five personalities, five perspectives, and five unique approaches towards one common sound. Foregoing current traditions, rather than initially focusing on live shows, the band played together for the first time in a recording studio in Philadelphia. This decision gave the band’s members - Holly Bowling, Tom Hamilton, Steve Lyons, Raina Mullen and Scotty Zwang - the ability to come to the project with fresh ears and no pre-conceived notions. They developed the songs as they developed their musical communication which led to trust, creativity and an adventurous take on the process. Scotty Zwang explained it thusly, “It’s a unique and interesting approach we get to take...” “we are being patient with each other and figuring out what the song needs” While the recording project has been the beginning point for Ghost Light, the live experience is what will define this band. “In the parts of the sessions where we have had a little more room to just let things go, there have been these little glimmers of what the improvisation will feel like live. That’s a whole other thing and it’s very exciting,” notes Holly Bowling. Tom Hamilton adds, “with this new band, we felt super comfortable going in any direction, knowing that with our new bandmates, the songs will get to where they needs to go. And in the live setting, that confidence is just as strong.” The first half of 2018 will see the band playing major venues in major markets coast to coast, followed by heavy rotation on the festival circuit. The debut record will be released in the second half of the year and will be supported by an extensive tour. In 2018 you will get to know Ghost Light, and the future could not be brighter.