UPDATED COVID-19 POLICY: www.thunderbirdmusichall.com/safety
*Must show proof of vaccination or negative PCR test within 48 hours of show, upon entry*


https://www.yondermountain.com
Pioneers. Innovators. These are but a few of the monikers that Yonder Mountain String Band has worn since their inception. From the first Yonder shows in the fall of 1998 to their drive-in tour of 2020, this touring force has brought their adventurous musical spirit to countless venues for nearly a quarter century.


Yonder Mountain’s early success was fueled by their desire to make a sound distinctly their own, whether performed on crowded stages or selling out the hallowed Red Rocks Amphitheater. Their traditional take on bluegrass sound was fused with their diverse musical influences ranging anywhere from punk rock to the Grateful Dead.

The combination of the band’s unique personalities, extended musical improvisations, their jam band fan culture and their collaborative effort on writing and arranging original songs which span multiple genres—attracted more of a freewheeling jam crowd than the traditional bluegrass scene which, in turn, exposed a whole new generation of fans to Bluegrass. 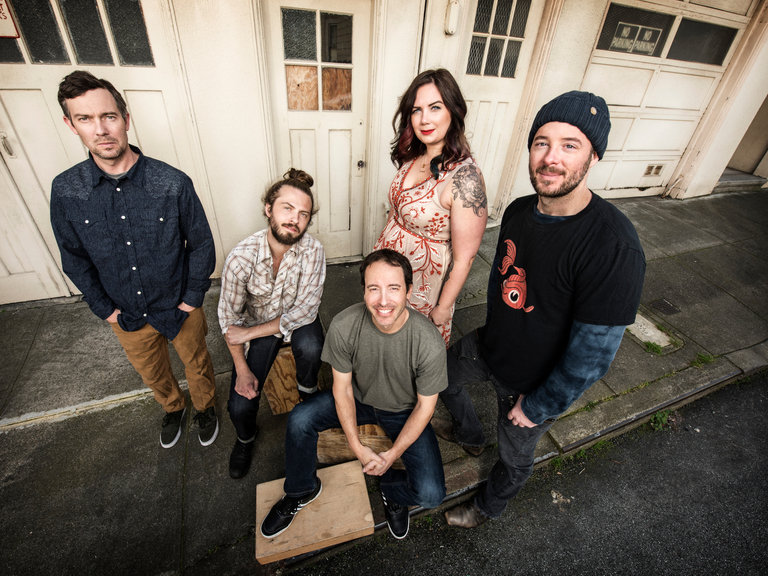 The Yonder Mountain String Band is an American progressive bluegrass group from Nederland, Colorado. Composed of Dave Johnston, Allie Kral, Ben Kaufmann, Adam Aijala, and Jacob Joliff, the band has released five studio albums and several live recordings to date. Having met in Urbana, Illinois, banjo player Dave Johnston requested Jeff Austin to join and sing in his band The Bluegrassholes. Austin, who played no instrument, revealed to Johnston that he owned a mandolin, who then told him to come to the performance and "play anything, just play fast and loud." After the collapse of The Bluegrassholes, Johnston moved to Boulder, Colorado, in order to further his bluegrass musical skills. Similarly, Austin moved to Colorado, but instead took up residence in the mountain town of Nederland, Colorado . Johnston soon joined him there. It was during this time in Nederland that Johnston and Austin met bassist Ben Kaufmann and guitarist Adam Aijala at a local club named the Verve. In December 1998, the four musicians formed Yonder Mountain String Band which was to open for a band at the Fox Theatre in Boulder. The band developed both a bluegrass and jam band fan base, and can often be found on tour. Their debut album Elevation was released on Frog Pad Records, an independent record label run by the band, in the fall of 1999. From 1999 to 2001 they performed as one of the many attractions at NedFest, a music festival held in the band's hometown. By 2000, the group was also playing larger venues, such as The Fillmore in San Francisco, California. In 2005, their recording of "Think for Yourself" was included on the album This Bird Has Flown – A 40th Anniversary Tribute to the Beatles' Rubber Soul. In 2008, the band performed at the 2008 Democratic National Convention in Denver. In 2010, it was revealed that Yonder Mountain would host a music festival at Mulberry Mountain in Ozark, Arkansas called Yonder Mountain's Harvest Festival. This is the same site where the larger Wakarusa festival is held and where the previous Mulberry Mountain Harvest Fest was held. In 2011, the festival's headliners included Bela Fleck and the Flecktones, the Simcha Aknin Band, Railroad Earth and the Emmitt-Nershi Band. In April 2014, Austin left the band due to "creative differences and conflicting career goals". After touring with the band since Austin's departure, fiddle player Allie Kral and mandolin player Jake Jolliff became official members of Yonder Mountain String Band in May 2015.